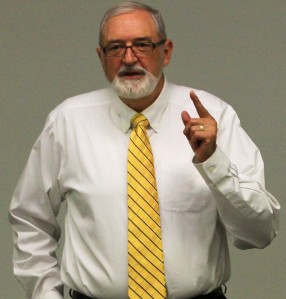 Parents — Do you do anything for your child he/she can do?  Church Leaders — Do we assume we know what people need to mature in Christ and if they just listen and carry out our instructions they will grow?  Dallas Willard once said to me in a retreat class, “The kingdom of God runs on personal responsibility”.  When God created Adam and Eve and placed them in the garden he gave them work, accountability and tests — he created the world to run on personal responsibility.

Do the people we love and serve need assistance, encouragement, and compassionate care?  CERTAINLY!!! But never let these vital ministries short circuit their personal responsibility.

A Summary Outline of THE MASTER PLAN OF EVANGELISM, Robert E. Coleman reprinted over 63 times since its publication in 1963.

I first read Coleman’s book in 1973 during my college days at East Tennessee State University.  I was involved in CRU (formerly Campus Crusade for Christ).  I wrote this summary after going through the book in an action group; our small discipleship groups on campus.  It stayed in my journal and has been like a North Star to orient me through over 40 years in parachurch and congregational service.  His book is still in print.  And a version with a small group study guide in the back is also still accessible.  Let’s make sure our main thing is Jesus’ main thing!  Roy King June 26, 2015

Steps to building and sending people to the world:

No evidence of haste just determination.

No big impact at this time, just investing in people willing to learn.

Jesus does not neglect the masses, but realizes that victory will never be won by the multitudes.

He let them follow him, and this was his initial requirement.

Lk. 8:10 Knowledge was gained by association before being understood by explanation.

Lk, 16:13 -The surrender of one’s whole life to the master in absolute submission to His sovereignty was required.

Obedience to Christ was the means by which those in his company learned more truth.

Obedience was modeled by Jesus as he lived in absolute obedience to the Father’s will. Jn.5:30, 6:38.

Matt.4:19- He assigned them work. He provided them with a vital experience with God and showed them how he worked, before telling them they had to do it.

“Christian disciples are sent men-sent out in the same work of world evangelism to which our Lord was sent, and for which He gave His life. Evangelism is not an optional accessory to our life. It is the heartbeat of all that we are called to be and do.”

He gave instruction, assignments and then regrouping to iron out problems.

“His whole evangelistic strategy, indeed, the fulfillment of his very purpose in coming into the world, dying on the cross, and rising from the grave depended upon the faithfulness of his chosen disciples to this task.”

A barren Christian is a contradiction. A tree is known by its fruit.

“The only hope for the world is for men to go to them with the Gospel of salvation, and having won them to the Savior, not to leave them, but to work with them faithfully, patiently, painstakingly, until they become fruitful Christians savoring the world about them with the Redeemer’s love.”

“The criteria upon which a Church should measure its success is not how much the budget is increased, or how many names are added to the roll, but rather how many Christians are actively winning souls and training them to win the multitudes.”(pg.113, 114)