In June I celebrated  the 46 year anniversary since my spiritual birth which God did at a conference of 85,000 people in Dallas TX — known as Explo 72. 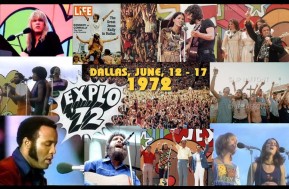 I will use my story to seek to underline the ESSENTIAL and SIMPLE core of making disciples.  How did God take a teen who thought he was a Christian because he occasionally attended a church and change his life forever?

#1 — Bud and Peggy Pettigrew acted on what seemed like a good idea at the time to help the youth group in the church they attended in Tennessee, raise funds to go to a conference in Texas.  Out of that conference several of us became Christians and gave our lives to Jesus to “Come Help Change the World”.

#2 — About a month later two young adults, Esther Cowan and Billy McCoy,  made a 2 hour drive to encourage us with the Bible and prayer to go to a follow up conference for those who had attended Explo.  Several of the youth and leaders went and many of us began a consistent daily journey of walking with Jesus in the power of the Holy Spirit.

I will stop here with these two examples.  As I have been giving thanks over what happened 46 years ago there are many, many more stories.

How do these actions focus us on the ESSENTIAL CORE of making disciples?

People who were Jesus followers:

Let’s not make disciple making too complex. Here are some questions to revisit continually as you go through a day.

What has God entrusted to me?  What can I say, “I cannot imagine facing life without this grace, this truth, THIS life I have received through Jesus.” NAME some of the specific blessings.

What is God doing around me right now?  What hearts has God given me some access to, some influence over, some opportunity, so I may offer to share what has given me life.

Ask God for the faith to step over any fear, the hope to endure, and the love of generous sacrifice to sow the seed.

Know that your God will give the growth.

You may or may not get to see the fruit that comes from your seed but sow it anyway.

It may not seem to be warmly valued and received in the moment but sow it anyway.

You may feel very uncertain where this step will lead to tomorrow but sow it anyway.

You may feel unqualified, and can think of others who would be better suited for the task, but sow it anyway.

SOW THE SEED GOD HAS GIVEN TO YOU AND LET HIM GIVE THE GROWTH!

It is a glorious freeing, joyful and scary way to live but you will see the final result of the work of God, that included your small seed, when you are with Jesus.

I WELCOME YOUR COMMENTS OR QUESTIONS.

4 thoughts on “THE Essential of Disciple Making”